Syd the Kid has come along way since her more provocative days in Odd Future. Legend has it that Tyler, the Creator, Earl Sweatshirt and the rest of OFWGKTA would go to her house to make their early mixtapes. Now though, Syd, Steve Lacy, Matt Martians, Patrick Paige and Christopher Smith are making music so effortless and funky; blending genres like R&B and Jazz to distinguish themselves from the cult-rap collective they were once associated with. 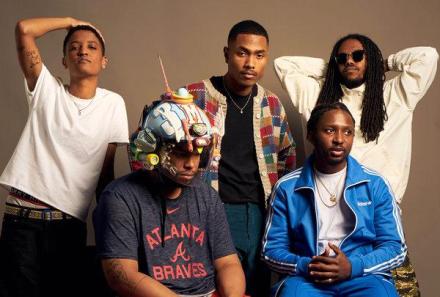 Lead single ‘Roll (Burbank Funk)’ combines tantalising textures of soulful vocals with an incredibly infectious baseline; strong enough to get anybody grooving.  Steve Lacy’s imperative lyrics are luring and invite us, as listeners, to join their party of unravelling rhythms. The album was created “all over the world” said Syd in a Reddit Q&A, this really comes through – especially in the last three tracks. Made in Australia, the tunes have a hazier vibe and show a switch in mood for the LP. Relaxed, soothing and breezy, ‘Beat Goes On’ and ‘Wanna Be’, especially, sound a lot more carefree than the other tracks.

Key themes addressed in their lyrics, like homosexual love, are uniquely interweaved into scintillating synths, which sit fittingly throughout the whole record. This project is the strongest sign of all of the member’s solo projects coming together to produce an exclusive sound that their family like following craves. The lack of features on this LP is probably the only initial downfall I can think of. Previously, we have been treated with features from the likes of KAYTRANADA and Tyler, the Creator. Often, this takes their music to the next level, adding an element to their music that makes it more out of the ordinary. You could therefore, maybe, say that this new album feels slightly safe; Syd and Co don’t heavily experiment with the sound they are known for. However, considering how good their previous album ‘Ego Death’ is, this doesn’t necessarily matter, and can consequently be an aspect we hope to see in their future LPs.